Week 2 of the NFL Season – be weary of overreactions from week 1.

Now that we’ve successfully ogled over the amazingness of a full Sunday of NFL football, we can put our thinking caps on for week two and learn teams and trends as they develop. It’s natural for us to overreact and say that Aaron Rodgers and the Packers are dead or the Chiefs look like world-beaters. By now, we’ve all seen enough NFL football to know these week 1 reactionary takes rarely hold a candle to what happens this season. Hell, if you turn on sports talk radio in Boston, you would think Bill Belichick is waiting for his walking papers any moment now.

What we can’t do as bettors is be too heavily swayed by one week of action. The NFL is and always will be a league of matchups. Teams will adjust accordingly for week two, and it’s on us to snuff out who can adjust week to week and get these covers for us.

Thursday Night Kickoff: The always entertaining and dynamic Kansas City Chiefs (1-0) come off of an impressive road win in Arizona to host their divisional rival on TNF, the Chargers. Lucas Herbert and his crew come off a pedestrian victory over the surprisingly anemic Raiders team in week one. As for the spread, It’s Chiefs -3.5, which tells you this is a coin flip after your obligatory 3 points for the home team and a big spot for Herbert to outduel a division rival potentially.

Buccaneers (-3) at Saints: The one neighborly nemesis in the NFC South that always seems to be a thorn in his side are the Saints. Regardless of time, place, or intangibles, New Orleans seems to have TB12’s number as a Buc. Now it’s a Jameis Winston-led Saints team heading back to his old stomping grounds to exact revenge. As I say it aloud, it seems unlikely, so Bucs -3 is hard to pass up in this spot. TB12 is due for some luck in the Superdome (wink).

Patriots (-1) at Steelers: After an embarrassing performance on offense, Mac Jones and crew look for any semblance of momentum in Pittsburgh against Mitch Trubisky and the Steelers. These Pats/Steelers matchups are always tough, physical, and low scoring, as the over/under total of 40.5 indicates. I’m wincing as I look to place a wager on my Patriots to bounce back in a tricky road environment.

Ravens -3.5 vs. Dolphins: The Ravens made waste of the Jets as they should have, and Miami looked strong on defense in its opener vs. the Patriots. Can Maimi’s front 7 keep Lamar Jackson in check and under control? That’s the inflection point in this early window game. Look for a lot of shuffling on defense early on both sides of the ball to figure out what works.

Ironically zero teams playing in the late window games got a win in week 1, but the Bengals (-7.5) at Cowboys do not lack storylines and variables heading in. Dallas is coming off a DREADFUL week one egg at home in which they only scored 3 points and Dak Prescott’s season got cut in half by a hand injury. It’s time for Cooper Rush to get the nod against a Bengals defense that went through it all in their OT loss. I have a sneaky feeling the Cowboys play inspired enough to keep it close, and this could even squeak over 43.5 points.

Night pick of the week:

Packers (-10) vs. Bears: I’m the husband of a Bears fan. I know by now that the most essential pillars of any Bears season are how many games they win and, more importantly, how they fare against their bitter rival to the North in Green Bay. It’s no secret that Aaron Rodgers has OWNED this rivalry in recent years, but now the fresh-look Bears come off a 19-10 win on a slippery Soldier Field, and the Packers seemed deflated after their week one loss. A week one overreaction would have you running to the bank to bet the Bears here, but what does your brain tell you will happen instead?

Lions (-2.5) vs. Commanders: Sorry former WFT fan base – I’m down on your squad. I know you got the W in last week’s “who cares?” game, but that doesn’t change your relevancy status quite yet. This time the Commanders head to Detroit to take on the 0-1 Lions. I’ll see you at Thanksgiving, Lions fans.

Just like in college football, there’s no shortage of stinky NFL lines that have you questioning everything you know and have seen. While the picks were less than phenomenal, I’m quite the czar regarding the weird vibes call of the week. Week Two was ANOTHER psychic feat as the Texans covered +8 to a lame old tie. This week, my spidey senses have me thinking that the Raiders could be in for an 0-2 start. It could be a stretch as they are -6 and hosting the Cardinals, but there’s too much bounce in Kyler Murray to keep that offense below 30 points two weeks in a row. I’m getting that urge to play a Cardinals Money Line bet, as I’m already giving my salute to the +6 cover.

Bills/Rams Under 53 was an excellent way to win the first play of the season, and Texans +8 reminds me that betting crappy teams works more than you think. Outside of that, we were on the wrong side of our losers by an average of 4 points, and Dak’s injury killed any chances of Dallas’ offense working on Sunday night.

To get the ball rolling, I think we have something with Thursday night unders. I understand the offenses at play, but if we get a start anywhere near as slow as last week’s in LA, I have to like Under 55 in Chiefs vs. Chargers.

Tom Brady finally solves his Saints curse and escapes the Superdome with a one-score victory, and The Bucs Cover -3

I’m still wincing, don’t forget that…but I am laying it down on Patriots -1 to win in Pittsburgh. With a decent history against Mitch Trubisky and a scrubbed offensive game plan this week, it’s time for Mac Jones to find receivers in the endzone more often.

This play is the epitome of buying low, but Dallas +7.5 (or likely 8) at home is certainly worth playing. It will be a run-heavy attack, and Cooper Rush is a backup for a reason, but he has 5 years of experience in the system. The Cowboys keep it close at home.

As per my weird vibe pick, the Raiders/Cardinals line stinks. I like the Cardinals + 6, and I may dare sprinkle a little on the money line as well.

Though I’m not in love with my wife’s Chicago Bears in this spot Sunday night, I love the idea of points left and right. This rivalry tends to produce zany outcomes, so I’ll go with Over 43 points in Bears vs. Packers.

The best crowd: Monday Night Football on a warm fall night in Buffalo for the Bills mafia as they take on the Titans. That will be LIT.

Tailgate pick of the week: Let’s load up on cheese curds and Italian Beef as an ode to the Bears/Packers matchup. 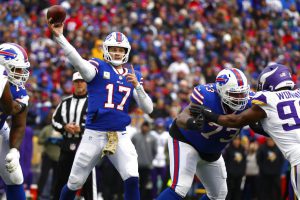 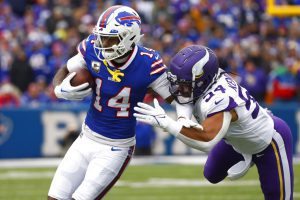 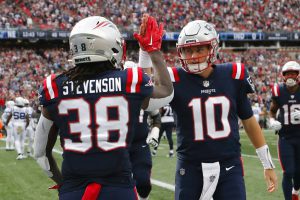